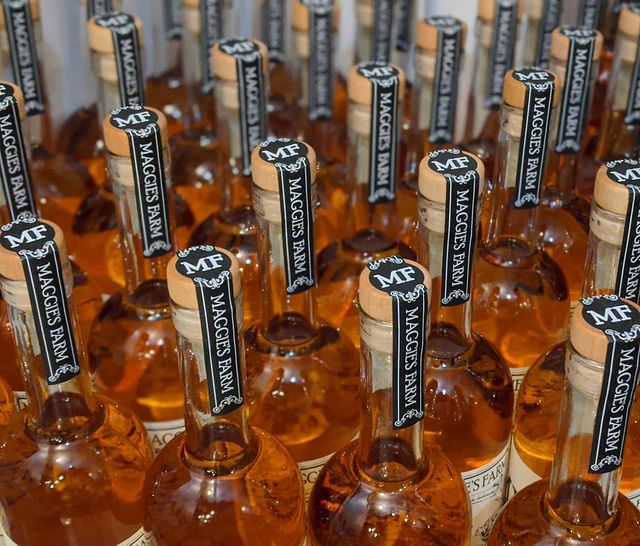 Black Friday marks the seventh anniversary at Pittsburgh’s Maggie’s Farm Rum and the distillery is celebrating with FIVE different releases.

The brandies are both fermented from recent farm pressings and crafted to retain as much fruit flavor and aroma as possible. 375 ml bottles of the pear brandy and blueberry brandy are available for curbside pickup or shipping across Pennsylvania.

The Cask Strength Single Barrel Rum is always a highly sought after release. Weighing in at just over 100 proof, this turbinado sugar-based rum is aged for a minimum of three years in used whiskey/rum casks. 750 ml bottles are $50 each, and there is a limit of two per customer.

Peppermint Coffee Liqueur is a seasonal take on MF’s Coffee Liqueur. For the holidays, the cold-pressed coffee liqueur is infused with natural peppermint, sugar, vanilla beans and white rum. 750 ml bottles are $32 each.

The Vanilla Bean Rum may have the most interesting story of all the releases. It’s part of MF’s Experimental series and has roots in an “orphaned barrel.” Stumbled upon in the aging room, there was no barreling date on the cask, so they added one of their single barrel rums, added vanilla beans and tucked the experiment away for another six months. The very limited release is bottled at 80 proof and there is a limit of two bottles per person. UPDATE: The VaniLla Bean Rum has sold out.

As if all of that isn’t enough, Maggie’s Farm Eggnog is also being bottled up and sold as a 32-ounce cocktail to go. Batches of eggnog will be available each day the distillery is open for takeout cocktails, but expect it to go fast.